another killer tune for you today, this time from Wales. You might not know the band, which is a real shame, because they are extraordinarily good, at least on this single. You might know the outfit though they turned into after they quit: The International Karate Plus.

But before that they were Mo-Ho-Bish-O-Pi, "as eclectic as their name is confusing" the NME once said. And I won't argue, because their fourth single is one of my most treasured items: an outstanding record indeed which makes me shout along with it every time I hear it at immense volume. 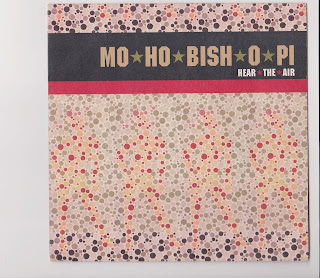 Mo-Ho-Bish-O-Pi, by the way, included Martin Bimrose on guitar, Richard Arnold on drums and Mike Carter on bass. The band's name is derived from Moho bishopi, the scientific name of the Moloka‘i ‘Ō‘ō, an extinct bird known to have lived in Hawaii. Martin Bimrose saw an article about the bird in the Readers Digest whilst waiting at the dentists. He thought that with some imaginative punctuation, "the name could be as mad as he is".

and especially a very good morning to the thousands of you who send in mails every day pointing out that we don't have enough skiffle here on Sexyloser: be relieved to hear that today's your day!

Alas I don't know all too much about Birmingham's finest band, Terry & Gerry, apart from what Wikipedia has to say:

"Unusually for the time the band was based on a skiffle sound making use of a washboard for percussion instead of a drum kit. Terry Lilley played double bass. Gerry Colvin sang lead vocals and played acoustic guitar.

Terry and Gerry took their style from nineteen fifties pop artists – they wore black evening suits and ribbon ties in the style of the Everly Brothers while sounding more akin to Britain’s Lonnie Donegan.
The songs written by Colvin/Lilley were remarkable for their brevity with the three songs on the first side of their debut EP 'Butter’s On the Bread' totalling just four minutes and five seconds. 'Butter’s On The Bread' referred to the miners’ strike of 1984.

'Butter’s On the Bread' appeared on Robert Lloyd’s Vindaloo records but subsequent records were released on the In Tape record label run by Marc Riley (ex The Fall).

BBC disc jockey and Donegan fan John Peel promoted the band when apparently by chance he picked out their demonstration tape because his wife’s best friends were also known as Terry and Gerry. He thought the coincidence was too great to ignore. The band recorded three sessions for the John Peel programme." 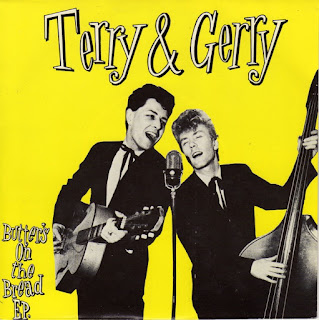 Terry And Gerry - 'Wait Until You're Older' (mp3)
from the 'Butter's On The Bread' 7" EP - Vindaloo Records - UGH 7 (1984)
This really is a fantastic tune, people, so please please please download it and listen closely to the outstanding lyrics: those will make your day, promised!
Have fun,
Dirk
posted by Dirk at Monday, May 27, 2013 1 comment:

something for those of you with an appetite for the bizarre today, at least in one form or another. I think it is a brilliant tune, albeit perhaps of some obscurity, then again - as I pointed out before - there is no reason to withdraw from it just because it is not commonly known amongst you youngsters out there.

The Pete Best Beatles were an eccentric Melbourne/Australia pub rock comedy act from the early 80's and no, I don't have the slightest idea whatever became of them. In my book they should rule the world, simply because of what is your number thirty-eight, people, so please enjoy: 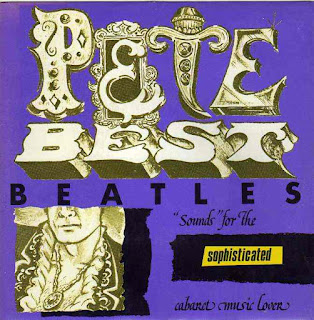 The Pete Best Beatles - 'Alamein Train' (mp3)
from the '"Sounds" For The Sophisticated Cabaret Music Lover' - 7" EP, Strine Music - SM 001 (1984)
Now, wasn't this neat? I know you all like it when a good story is being told in a song, right? And so do I .... also there is a fantastic video of a live performance of that on Youtube, highly recommended, so have a look there as well!
I really would like to know whether this stroke a chord with you or not, so please leave a comment, okay? Thanks ...
See you soon/take care,
Dirk
posted by Dirk at Friday, May 24, 2013 2 comments:

there might be some of you who'll think that today's choice must have been a hard one for me, but let me assure you that this was not the case. Even if I owned all of the singles New Order ever released, I wouldn't have contemplated for a second which one to choose. Okay, I would have had some difficulties if  'Blue Monday' hadn't come out as a 12" only. But as this was not the case, I went for their first and, at least in my humble opinion, their very best release. 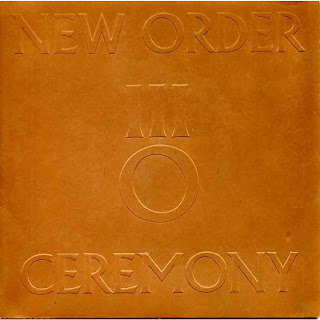 As you might know this song is one of the very last ones Joy Division wrote. Personally, I never saw much of a Joy Division - influence in the New Order release above, not in comparison to the version on 'Still' at least ... to me this always was the start of a superb new band, one to watch out for.

Which one would you have chosen?

something more contemporary for a change today, that's if you consider a five year old record to be contemporary, of course. In my age I easily do this, in fact everything released after 1990 or thereabouts is new to me, I'm afraid.

Today's single was critically acclaimed, but commercially unsuccessful, don't ask me why. It never charted anywhere, which I don't understand at all. Perhaps because it was the closer of a very fine debut album and the last one of quite a few singles released off said album ... perhaps people got a bit fed up with this, I dunno.

For me it is the perfect start of what might easily be your "Top Ten" in our little series ... although, as I pointed out before, there is no real Top Ten. This one here plus the next nine singles are as good as number 4 was, for example. Perhaps a little bit better, but I'm not absolutely certain about this either. But that's not important anyway, right? The main thing is: another nine belters are waiting to be introduced until mid-June and I do hope that you stand to attention until the last one has been featured! 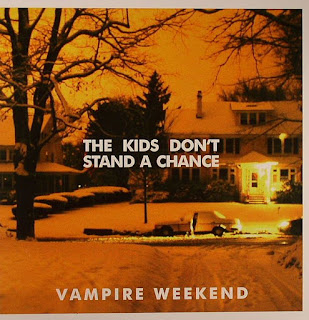 okay, quite some time since we last had something of a certain obscurity here, this will change today though.

A little chunk of plastic left by a band no-one ever heard of, no-one ever saw and who never went anywhere but still theres a couple of minutes of magic that captures a feeling/time/emotion eternally for the people who connect with it, although the Joy Division influence is still apparent, then again: is this a bad thing?

What makes this tune so mighty to me is the big build up until the lyrics come in, this alone surely makes it a masterpiece of its time. Your number thirty-five, folks, enjoy: 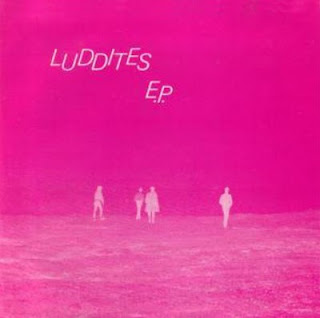 The Luddites - 'Doppleganger' (mp3)
(from the 'The Strength Of Your Cry' - 7"-EP) - Xcentric Noise Records - Second 1 (1983)
And, should you have been wondering, yes, I do know how to spell 'Doppelgaenger'. The Luddites, apparently, didn't.
Then again: who cares anyway?
Cheers,
Dirk

another oldie but goodie today, then again ... what did you expect: last week's number one in the charts? Not really, right? 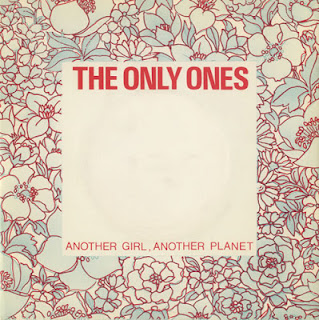 "Another Girl, Another Planet" is by far The Only Ones' best remembered song and has become something of a standard.

The Only Ones are often considered a one-hit wonder due to the popularity of "Another Girl, Another Planet" although the song was not actually a chart hit upon initial release in 1978. The track's first chart appearance was in July 1981, when it appeared at #44 for one week on the New Zealand charts, before dropping out of the top 50. More than a decade later, "Another Girl, Another Planet" appeared in the UK charts for two weeks in January 1992, peaking at #57.

The record is distinguished by soaring guitars, wounded vocals and Peter Perrett's elliptical lyrics framing a blasé, weary take on love and romance.

Allmusic calls it "Arguably, the greatest rock single ever recorded".

And me, I won't dare to disagree to that.

we had The Raymen (led by Link Wray) on Monday and we'll have The Raymen (led by Hank Ray)again today: I know you're all shouting "what a segue!!" at this very moment, but you don't have to thank me, no, I'm only here to please you with such extraordinary flashes of genius!

I stole the below from their website and I think it says it all:

"Since 1983 the Raymen have been spearing the essence of Bo Diddley, Hank Williams, Link Wray and Howlin Wolf in the guise of Punk-a-billy / Rock-a-billy – na-na in a way that taps directly into every boo-hoo rebel dream crying out in the night.

Total reverb-drenched echo-max land with a fist in the history of R’n’R pulling out the heart of American music in every warped take, beating rhythm-off Catholic sex and using it to put nitro-overdrive and vision into our collective psyche. This isn’t pretend scary Rock-a-Billy style crap all duded up. This is the rhythm and blast that made every over-powered, over-sexed run from confusion in the American juvenile delinquent hormonal nightscape that originally found voice in Punk and Rock’n’Roll."

This tune is good throughout, friends, a real killer .... and you shouldn't miss it, so download it NOW! Your number thirty-three, enjoy: 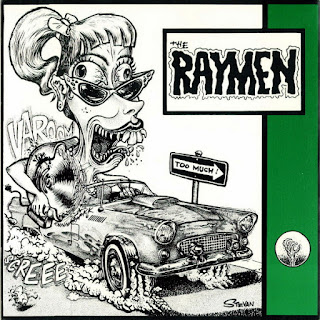 an instrumental (well, 99% of it anyway) for you today for a change and ain't that nice?

The tune was originally composed my Neil Hefti back in 1966 and the cover version I have for you today comes from the same year, from a 7" on the Swan Label in fact.

A great piece of music and I'm sure despite of its age everyone of you youngsters will be able to hum along to it. Your number thirty-two, people. Enjoy: 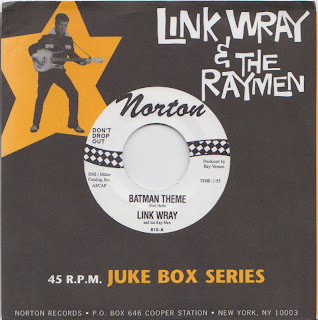 
Needless to say that I don't have the original Swan single in my collection, so this comes from a 1995 re-release on Norton Records from their Juke Box Series. Now, I don't have a Juke Box, nevertheless this doesn't spoil my enjoyment: hope this applies to you too.

see, I hate to say this, but it is a good thing, at least for this nice little "45 45's" - rundown, that I don't have all that many 7" singles by The Jam and The Clash in my collection. Otherwise the series would have shown a serious lack of variety ("It does that already!", I hear you cry ...), because most probably 50% would have consisted of just those two bands.

Two Jam - singles will be featured, here's the first one, your number thirty-one. Enjoy: 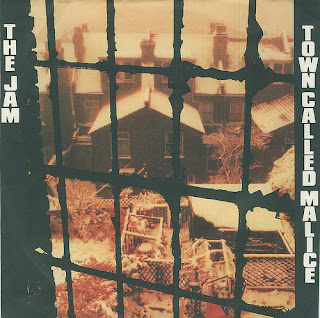 
Of course this record doesn't need any explanation. Sheer brilliance, as far as I'm concerned. Their 15th single and - quite rightly so - another number one.

I do honestly think the day on which I get tired to listening to this record will never come.