and yes, the hits keep happening here on Sexyloser: another one you know/should know/will know if you download it right now.

For a change this is a record that made it into the (UK-) charts, all the way up to No. 53 in fact. Should have been much much higher in my humble opinion ... obviously. 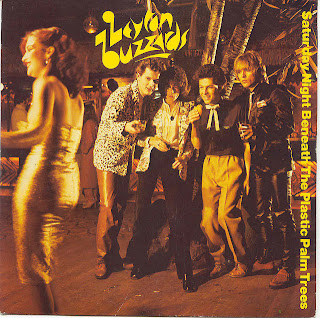 
A great tune with great lyrics, especially this bit

often remembers me of when I was younger and still pretty as a picture. Okay, I admit I didn't yet drink back in 1969, but the attitude didn't change much until 1983.

It never will, I suppose.

a well known song for you today again and - in my humble opinion - t.h.e. definitive reading of the old Elvis - favourite. Of course the truth of the matter is that the tune is not by Elvis at all (then again: what was back then? Nothing much, ey?), but by a chap called Mac Davis. So there you are ...

Hearing this one still sends shivers down my spine after all those years. Your number twenty-nine, people ... enjoy: 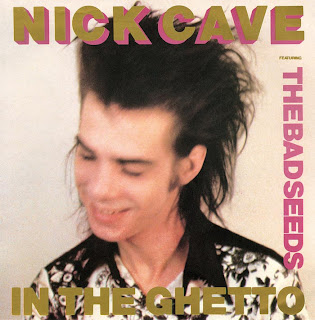 today something with a bit of recognition value for - I suppose - most of you, and why not? One should offer these things from time to time, keeps the customer happy and satisfied, right?

The Quads came from Birmingham, released four perfect pop singles, reached no. 66 in the charts with this record, then were gone. The melody is great, the guitar clean but aggressive at the same time - in fact its' sound is hard to compare indeed, bloody brilliant - plus distinct vocals: T.H.E. PERFECT Powerpop/New Wave/Mod (you name it, I can't) - tune as far as I'm concerned.

Your number twenty-eight, people, turn this up good and loud ... and enjoy: 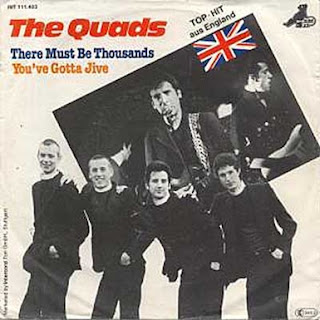 Why did ‘Teenage Kicks’ become known to everyone, but ‘There Must be Thousands’ lies virtually forgotten? I can't think of many other record that so powerfully expresses the delight in singing your heart out!

PS: when you turn the record over, you'll find that the B-side ('You Gotta Jive') is every bit as good as the A-side. What were they doing putting this on the B-side? It’s just as great a pop song, with a unique guitar riff, irresistible drive, and a sly stop-start surprise towards the end.

Have a sunny day,

alright, as you might already have gathered, it only was a question of time when something by The Smiths would come along in this rundown. Let me point out - again - that the sequence by and large does not reflect my estimation for the chosen tunes. This might change a bit when it comes to the last ten singles or so: all of them are top notch in my book and this will never change.

The Smiths. Well, I must admit I never really understood the fuzz that was made about them (and still is) in fact. Yes, they were fresh, they were new, they were brilliant. But there is an enormous amount of people who say that they are the best thing since sliced bread .... I never really could share this opinion. Still can't.

The first I heard by them was - immediately upon its release - the debut album, which I still regard as being an absolute masterpiece. Only quite some time after that (well ahead into 1984, if memory serves correctly) I got to listen to their second single, 'This Charming Man', which was released 5 months before the LP). To be absolutely frank to you: I didn't like it very much. At least not in comparison to most of the songs on the album. And you know what: this attitude hasn't changed much in the last 29 years. I carefully watched what they did until their end, but they never matched the debut album, as far as I'm concerned. As it so often is the case with other bands as well, it must be said.

But there is one non-debut album - song which I always adored, funnily enough one you don't hear all that often: your number twenty-six, friends. Enjoy: 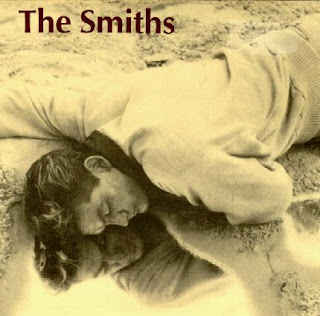 
A serious proportion of their singles weren't lifted from albums, and they came with B-sides and extra tracks that were not only exclusive to the singles, but were frankly as good as the A-sides.

Such a prolific output led to several compilations sweeping up those non-album tracks ('Hatful Of Hollow', 'Louder Than Bombs', 'The World Won't Listen'), yet somehow 'Jeane' slipped through the net and appears never to have been issued anywhere but on the B-side of the 'This Charming Man' 7".
At least as far as I know.
Take good care,
Dirk

believe it or not, but after having survived months of months of freezing cold weather, now - as an improvement doesn't look at all impossible - I have got the flu and I feel like shit. So bear with me, please, if today's post is even shorter than usual. The again there ain't that much to say/to find in the www about the tune anyway, but - and that's for sure - it is a great great record. Magic, in fact. 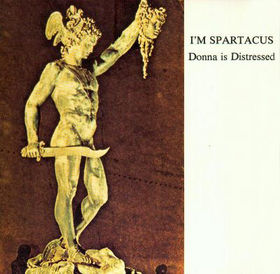 A bit of a collector's item these days and I remember that even back then I had quite some trouble in getting hold of a copy. Australia's I'm Spartacus were Nick Cecire on drums, Gino Palmieri on guitar and John Marr on bass and vocals. And no, it's not that John Marr ... at least I don't think it is ...

Good morning to you,

I know this will sound like a most lame excuse for my laziness, but - believe it or not - today there is a reason for my unability to tell you something interesting about the choice of the day, and a good one at that:

Mostly I write my little essays when being at work, no problem with that, but earlier on I constantly failed to ascertain any background information to today's pick whatsoever, because some stupid internet filter screamed "ALARM!" whenever I googled for either 'Tits', 'Stiff' or 'Teenage'! Pornography rules this world, I tell you!

So, as I don't want to see the head of our IT Department appearing behind me in a few minutes in order to ask  - quite rightly so - what is wrong with me, and thus finding myself on the dole tomorrow, I thought I'd better just give you the record without further ado: your number twenty-five, friends, enjoy: 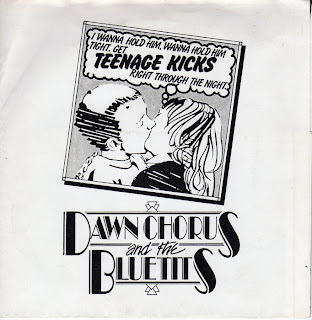 
If memory serves Dawn Chorus were Liz Kershaw and Carole Vorderman ...  well known names to the Brits amongst you, I suppose, they don't mean that much to us over here in real Europe.

Remarkably, David Bowie is credited with playing bass guitar, while the Undertones’ Damian O’Neill is listed as guitarist. Then again, over the years, I never really believed Bowie to have participated here.

for a change something from a different part of the world, but nonetheless well worth downloading and listening to at stupendous volume.

The artist behind today's choice isn't easy to describe, or better: what he did and achieved for his country in his lifetime is hard to believe. Therefore I will just copy/paste a little something from "Caribarena Antigua - The Best Caribbean News Portal", dated May 5th 2012, which, I think, by and large says it all:

Antigua St John's - As part of the ongoing 50th Anniversary Celebrations for Sir McLean “King Short Shirt” Emanuel, the 50th Anniversary Committee on Saturday, June 16, 2012, under the theme, “WE ARE THE ONES…” will host a “Black-tie” gala at Sandals Grande Antigua Resort & Spa.
Sir McLean’s peers will gather to pay tribute to him, for his tremendous contribution to Antigua and Barbuda’s development, particularly in the Tourism and Entertainment industries. 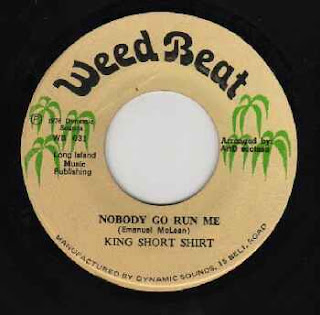 
A mighty record, friends. Again: do yourself a favour and listen to this!

And leave comments if it meets with your approval, will you?