yes, another one of those boring mixes, but, believe it or not, one I enjoyed doing mightily indeed!

My wife got hold of one of these radios from the 50's for the living room, you know what I mean, not originally from the 50's, brand new in fact, those cheap things that have a turntable and a tape slot, USB device plus radio function, but look as if they were from the 50's. The pick-up is utter crap, but the tape and the USB bit sounds pretty good. So in my wisdom - basically in order to avoid having to hear shitty radio stations chosen by Mrs. Loser all the time - I made up another one of those mixes and put it on some USB stick, so that at least I can listen to some good tunes from time to time without having to run upstairs and bring them all down separately.
Don't ask me why, but it turned out to be all women on this mix ... again. The last posts about girls making noise seem to have struck a chord with quite a few of you, so I thought "oh, why not, let's try it again!", so there you are, enjoy ...: 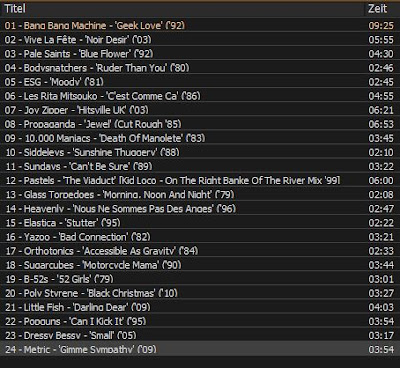 Something in it for everyone, I would have thought, right? Let me know what you think, right?

Until then, take good care, 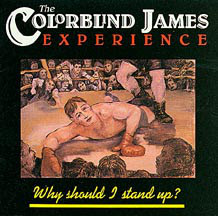 
does it happen to you as well that you find yourself adapting more and more certain habits of your parents, bearing in mind that for the last 30 years or so you so often swore to yourself that this shall never happen? Well, it happens to me occasionally, but, as we'll find out in due course, it's not a bad thing at all:


My mum would never throw anything anway, and I mean never! A manner I disliked intensenly when I was younger, but yesterday I found out again that I am not much better than her: it's all in the genes, you see!


Over at Jez' place the topic of the most wonderful Colorblind James Experience came up a few days ago and the tune Jez posted seem to have struck chord with a few people. Now, early stuff from The Colorblind James Experience is not terribly easy to get hold of these days, but luckily I remembered that somewhere I still have a cassette of their second album, 'Why Should I Stand Up?', released in 1989, two years after the great debut album. Quite why I bought it on cassette back then and not on vinyl, I simply can't remember. Old age, for sure ....


In a true "Give-'Em-Enough-Rope - style" (everybody will understand what that means, apart from George, so there you are, sorry George!) the album certainly isn't as good as the first one. But, being colorblind myself - so there still is a certain affection from my side - I ripped it for you, should anyone be interested and - so I should add - we are talking about an original Cooking Vinyl - cassette, not one of those cassettes copied in the 80's from a friend on a dodgy tape deck who had a friend with a dodgy tape deck who copied the album from a friend who had it on second hand vinyl, no Sir!


See, it's good not to throw too many things away too early (I still do miss this bunch of early Postcard singles I gave away for 20 Deutschmarks back in the early 90's, oh boy! *), anything might become useful again sooner or later. The same is true for my dodgy tape deck, apparently, as this post shows!


So, friends, enjoy, enjoy, I'm sure there are at least a few who certainly will! 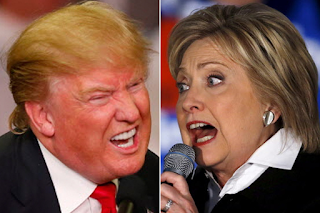 
and especially American friends. There ain't many of you, I admit, but honestly, tonight I don't envy you one bit for being American (actually I don't do it at others nights either, but that's a different story): whatever you do, whichever of the two cunts you choose to vote for, you just can't do the right thing, I'm afraid.


And the main problem is that it won't be all too long before all of this will have a serious impact on European politics as well: God help us all!


Here are a few tunes that I just couldn't get out of me head within the last few days:


Tonight's dilemma is so crucial, at least so it seems to me, that - in comparison to the the two jerks currently shivering on the other side of the Atlantic in the thought of whether or whether not they will be leader of the free world by tomorrow morning - the title of this next one has become true. And I never thought I'd ever say this:


PS: I'd love to have included John Cooper Clarke's mighty 'Twat', because by and large it sums up neatly my thoughts about those two imbeciles, but for the life of me I couldn't find it. Sorry, but then again I suppose you know it by heart anyway ...