to my great dismay I have to tell you that I just found that apparently google and/or boxnet seem to have managed not to publish all the hundreds of posts that I prepared in advance 18 months ago in order to appear here on more or less a daily basis for your sheer enjoyment: unbelievable, isn't it? Then again this just shows me to check my own blog more frequently … so: no hard feelings, right?


Either way, Monday's long song it is, and more or less immediately I thought of this gem:


'The Presence' was (and still is, I suppose) the A-Side from Crispy Ambulance's third single, 'Live On A Hot August Night', released on Factory Benelux (FAC BN 4) and it's 13:05 minutes long. So, the length is okay, and as it's outstandingly good as well, it should easily qualify to feature in this series, I would have thought. 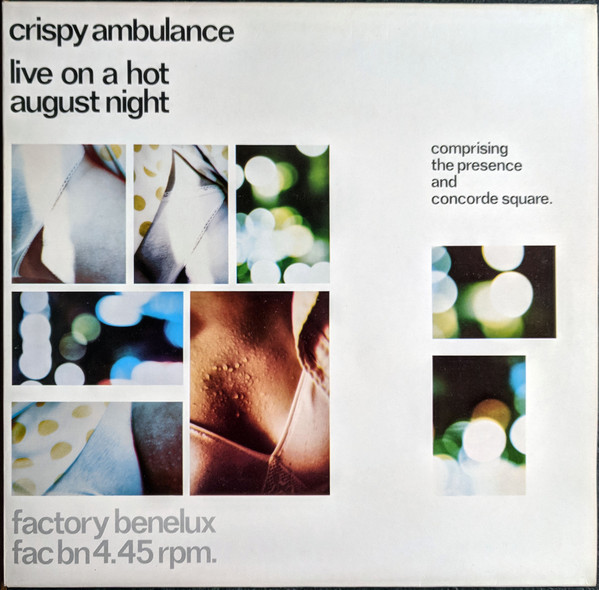 I searched a little bit to be in the position to tell you at least something about the band and found a great biography on Teen Beat (http://www.teenbeat.net/artists/crispyambulance.html) which also contains some Factory insights which might or might not be known to you already. I hope the nice people at Teen Beat won't sue me for a little bit of the good ole' copy/paste - job:


Following the death of Ian Curtis in May 1980, Rob Gretton became a Factory director, and in July persuaded Crispy Ambulance to release their next recording through the label. FAC 32 thus became Gretton's first-born in his capacity as an A&R man. Hempsall again:


"Tony never liked us, but suffered us because Rob liked what we did. Since he had become an equal shareholder, Tony had no choice but to bite his lip."


After two promising if hardly exceptional singles, the first real sign that Crispy Ambulance were more than just a weird name came with the third, Live On A Hot August Night. Not live (and recorded at Cargo Studio in Rochdale in January) the session was produced by Martin Hannett, who achieved an astonishing sound ranked by some amongst his finest productions. The single comprised two extended tracks which sat together perfectly, despite being poles apart in terms of style. 'Concorde Square' was a bright, almost blinding guitar glide, and probably the closest the group ever came to writing a hit single, while 'The Presence' was lengthy, languid and hypnotic, drifting weightlessly above a soft electronic pulse and whiplash snare.

Although Factory shot a video for 'The Presence', the flipside's mordant six minute gregorian outro triggered a free transfer from Factory to European offshoot Factory Benelux, the single emerging as a 12" in July. Hempsall:

"'Hot August Night' was the first time we actually went into the studio as a Factory band. As a matter of course Hannett was used as he was The Factory Producer... Tony craftily got us off his back by depositing us on Factory Benelux, which we didn't object to because Tony was only making things difficult for us whilst on Factory, whereas Michel Duval, boss of Factory's Belgian counterpart, genuinely liked us, and had an enthusiasm for the records almost as strong as our own."

"Rob Gretton was always more interested in tunes than anything else, so when we had six minutes of voices and piano on the end of 'Concorde Square' he found this a bit strange. We began to move out of his field of understanding."

Comprehension was also found wanting in the fourth estate. According to Melody Maker:

"The best and worst of Martin Hannett and, as usual, you can forget about the band. 'The Presence' illustrates his genius for that eerie, evocative snare-obsessed sound, cleverly maintaining interest in another Curtis clone crooning another doomy dodo of a tune. 'Concorde Square', however, is the most melodramatic manifestation yet of his frustrating feedback fetish, allowing the group a begrudgingly cursory run for their money before picking put a particularly rich resonance and toying with it into uncharted territories of tedium. One for earnest New Orderites and strict Samaritan-cases only."

At least the Maker bothered to listen to the record - all 22 minutes - from beginning to end. In the opinion of the NME:

"After the power and the passion that was Joy Division, imitators like Crispy Ambulance just sound listless and unoriginal."

Although the switch to Factory Benelux was effectively a relegation, the move would prove Factory's loss, for the following year Crispy Ambulance delivered an album which many connoisseurs rightly regard as a jewel in the Factory crown ('The Plateau Phase', released in March 1982).