"Bands I've Seen Live When I Was Much Younger And Still Pretty As A Picture": # 1: Red Lorry Yellow Lorry

A good day to you, friends!

The first post in quite a while, for which I'm sincerely sorry, but, you know, I just couldn't think of anything at least halfway interesting to write about.

But yesterday Mrs Loser sent me to the attic to get something heavy down from there for her and whilst I stood there in the midst of  the considerable chaos (really unbelievable: we built the house in 2004 (with no cellar) and our attic could already play a starring role in some series about Messies on private TV) I found my framed concert ticket stubs from yesteryear ... a much treasured item, so I decided to fix it to the wall beneath my computer screen and I'm looking at it right now whilst typing this.

In my younger days I went to loads and loads of concerts, which never was that easy, because I grew up in the middle of nowhere: the next city - Aachen - was like 40 kilometers away and the next big cities - Cologne and Düsseldorf - some 80 kilometers: hard to reach with an unreliable old moped, as you might imagine. Things obviously became easier when me and me mates got older and had unreliable old cars.

But, to cut a long story short, my aim is to choose one of those stubs, tell you a little bit of nonsense about the gig and the venue and all the bright young girls I feel in love with there (not that they cared pretty much about that, let me add) plus post a song or two to accompany the story. And hopefully this will turn out to become rather a long lasting series. What do you think? Sounds fantastic, ey? So let's start with: 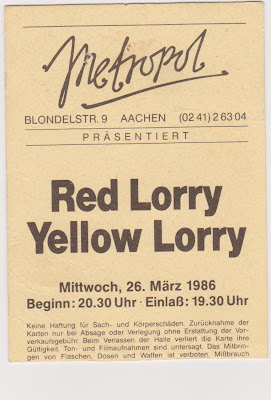 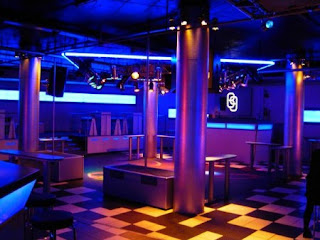 The Metropol in Aachen (as pictured above) by and large was the only real discotheque to go to for people like us: always a bit on the punk/indie side of life, musically and fashionably as well. There were other places to go, but they'd require like suits and ties, which was not out business at all. I spent a fortune in the Metropol, I'm afraid, not only for gigs but also for beer for weekend amd mid-week visits for years to come. Aachen, to give you a picture, is a student town with 250.000 inhabitants, but, to my great dismay, only famous for industrial and/or mechanical engineering as well as computer science students ... and those are a) by and large all men and b) the most boring creatures god created at that.

I don't have much memories on the Red Lorry Yellow Lorry gig, apart from the fact that it was really hot and sweaty in the venue and that I struggled very hard not to be beaten down by loads of very cool indie guys who were much stronger and older than me (I was 17 in May '86) ... some punks were there too, but I think the majority of guests belonged to the local indie camp.

Of course I first heard Leeds' Red Lorry Yellow Lorry on Peel's BFBS programmes and I liked them a lot from scratch. I bought the first two LP's plus a 12" and they were good throughout. But despite of this, as it so often is the case, the records couldn't capture the sheer energy this band was able to develop when playing live (well, at least this is true for the gig I saw: all their other live performances might as well have been absolutely shite ...).

I assume you might by now be missing the promised girl-factor in all of my rambling: well, there isn't any 'cos there weren't that much girls in the audience as far as I remember: perhaps the band was too "industrial" to attract attractive girls. Bugger! So let's have some music instead:

Red Lorry Yellow Lorry - 'Hollow Eyes' ('85): the first track I heard of theirs on Peel, from their debut LP.

Hope you enjoyed bits of that, comments highly appreciated, of course!