welcome to number thirteen in the "My Peel Tapes" - series. Some killer stuff in it for you this week, that's for sure!! I highly recommend to have a close look at the 'upon request' - section, this time you will find some real goodies there ... so don't hesitate to send in requests!
(96) The Darling Buds - 'Hit The Ground' (mp3). The Darling Buds were in 1988, at least they were to me, what The Primitives or The Shop Assistants were two or three years earlier: a bloody awesome band led by a cute blonde goddess, Andrea Lewis. Which was way enough to make me happy back in those days .... this and their catchy pop tunes. Their album 'Pop Said' on CBS (1988) still sounds good to me today and I hope that 'Hit The Ground' will have the same impact on you!
[upon request:
Happy Mondays - 'Do It Better'
King Of The Slums - 'The Pennine Spitter']
(97) Ciccone Youth - 'Addicted To Love' (mp3). Ciccone Youth is an experimental band which was formed in 1986. It is a side project of Sonic Youth members Steve Shelley, Kim Gordon, Lee Ranaldo, and Thurston Moore, with the Minutemen/fIREHOSE member Mike Watt. You'll find 'Addicted To Love' (the definitive reading of the old Robert Palmer favourite, I would say) on their second release, 'The Whitey Album', released on Blast First in 1988. The track was recorded in a karaoke booth, by the way ...
[upon request:
Suicide - 'Suffering In Vain']
(98) The Sundays - 'Can't Be Sure' (mp3). Hah!! The Sundays!! Harriet Wheeler!!! Oh boy, I was deeply and profoundly in love with her voice after having heard the first seconds of this mighty mighty track, I remember! This was Nr. 1 in John Peel's Festive 50 in 1989 and - again - quite rightly so! A 12" on Rough Trade Records from, as I say, 1989. I also recommend the LP 'Reading, Writing & Arithmetic' ... I'm pretty sure you can find it for little money in any second hand record store in your neighbourhood.
[upon request:
Malaria! - 'Kaltes Klares Wasser'
Passions - 'Man On The Tube']
(99) The Cure - 'Primary' (mp3). One you don't hear all that often: the 12" - version of 'Primary', which goes on a bit, but that shouldn't spoil your enjoyment. Released on Fiction Records back in 1981 and a bit of a collector's item these days.
[upon request:
New Order - 'Vanishing Point'
Big Dipper - 'He Is God'
Sundays - 'Don't Tell Your Mother'
Mudhoney - 'No One Has'
Darling Buds - 'The Other Night']
(100) The Valley Girls - 'Marina Men' (mp3). Well, now this is one of my favourite tunes ever, a definitive choice if I had to choose a handful of records to take with me to a desert island. Also it ends with my absolutely favourite song line ever: "Yeah, I learnt quite a while ago not to be afraid to wear fashion underwear"...
'Marina Men' was recorded in 1982 and issued as a 12" on Rhino Records. Deleted, of course. If I only had a scanner I would be able to share with you the wonderful back of the sleeve, which in fact is described as the 'Val Talk To English Dictionary'. The description of the Aquavelva Geek for example reads as thus: "(ak' wa vel'va gek) n. : Distasteful individual hailing from Marina Del Ray area; frequently divorced and on the make." Next to this there is a little comic-style drawing of the Geek with clothing details described below: "1. attempted perm on balding head, 2. fake gold chain, 3. unbuttoned white collar shirt, 4. chest hair wig, 5. Casio alarm watch w/ Pac Man game, 6. Ultra-suede jacket, 7. doubleknit pants, 8. Justin boots."
The Valley Girls were Chrissy Peters (16), Sonia Gordon (16) and Pamy (18). And believe it or not: a few months ago I received an email from a nephew of one of them who told me that they all are doing fine in their private lives!

(101) John Moore & The Expressway - 'Out Of My Mind' (mp3). A pretty cool record by John Moore, about whom I can tell you very little alas, nothing much, to be precise, apart from the fact that he once was in The Jesus & Mary Chain, but I'm sure you knew that already. A 12" on Polydor UK from 1989.
[upon request:
Dub Sex - 'Swerve'
Pixies - 'Monkey Gone To Heaven'
Jesus & Mary Chain - 'Cut Dead'
Nick Cave & The Bad Seeds - 'Watching Alice']
(102) Birdland - 'Hollow Heart' (mp3). Another band that never got the attention they deserved. This track is as fine as (mostly all of) their self-titled debut album, which was issued not before 1991 strangely enough. 'Hollow Heart', their debut 7" though, is from 1989 and was released on Lazy Records. And because I am such a nice chap, I'll play to you the acoustic version, which might not be that familiar to you.
[upon request:
Pixies - 'Debaser'
John Cooper Clarke - '36 Hours'
Pixies - 'Here Comes Your Man'
Pixies - 'Mr Grieves']
(103) Crime & The City Solution - 'The Shadow Of No Man' (mp3). The bands collectively known as Crime & the City Solution provided a starling new look at the concept of rock. Lead by an unrelenting voice in Simon Bonney, the band included musicians from other bands including The Birthday Party, Einstürzende Neubauten, Nick Cave and the Bad Seeds and more. During it first tumultuous stage in Australia, the band was just a spark of the flame which was to burn in London and Berlin in the mid to late 80's. Above track is from 1989 actually, a 12" on Mute Records.
[upon request:
Popguns - 'Landslide'
Pixies - 'Crackity Jones'
Pixies - 'Nr. 13 Baby']
(104) The Smiths - 'Jeane' (mp3). Another one you don't hear all that often, hidden away on the B-Side of the 1983 'This Charming Man' - 7" on Rough Trade Records. Obviously The Smiths had written hundreds of adorable songs in their career, but this is the one I like best. If you've never heard it before: it's a real treat, I can promise you! Enjoy, enjoy ....
[upon request:
Happy Mondays - 'Lazyitis'
Inspiral Carpets - 'Joe']
(105) Maloko - 'In The Midnight Hour' (mp3). One of my all-time favourite records is a 12-inch by some people called Moloko. This was a single released in 1989, and it's a cover version of Wilson Pickett's 'In The Midnight Hour'. Now, 'In The Midnight Hour' is a great record, but this is' In The Midnight Hour' done soukous style. It was recorded in Florida, but it's got this extraordinary soukous guitar playing. Have a look for the 'Fabriclive.07: John Peel' - CD on Fabric Records from 2002: it includes this little gem amongst a fine collection of other goodies.
[upon request:
Woodentops - 'Move Me'
Bailter Space - 'Greater Spader']
(106) Benny Profane - 'Skateboard To Oblivion' (mp3). Half of Benny Profane once were The Room. Do I need to say more or is this enough for you to download this tune? One of the very few follow-up line-up's which lost nothing much of their quality in the transformation. The Room were just brilliant. Benny Profane were equally brilliant. As easy as that. Another 12", this time on Play Hard Records from 1989.
[upon request: Perfect Disaster - '55']
(107) The Lemonheads - 'Luka' (mp3). Another fine example of a recording where the cover is way better than the original (by Suzanne Vega). I always liked The Lemonheads a lot and I still do listen to their back catalogue on occassion, especially to all of those nice little 10" singles they recorded in the early 90's. This though can be found on a 7" on Taang! Records, coloured vinyl, I might add, released in 1988.
[upon request:
Nirvana - 'Mr Moustache']
(108) Ted Chippington - 'Feel Like Buddy Holly' (mp3). Well, you either love Ted Chippington or you hate him. As you can tell, I love him. Disappeared without a trace around the end of the 80's to work as a truck driver in the States, but now back in the UK and - as far as I know - performing again (if 'performing' is the right word). 'Feel Like Buddy Holly', originally done by Alvin Stardust, can be found on a very early LP from him called 'Man In A Suitcase' on Vindaloo Records from 1986. 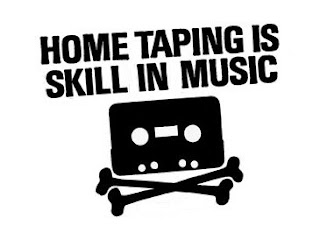 first of all sincere apologies for the fact that there hasn't been an update to the series for nearly one month now. The truth of the matter is that I had too much to do when coming home from work. But things will improve and I hope to have the next episode ready in due course.

In the meantime I thought I was very pleased to fulfill Jonathan's request: he wrote in yesterday and - in addition to sending me a very nice logo for the series (which will most definetely be used for the next edition) - wanted to hear what - in my view is the outstanding track from a brilliant Peel Session - 'Saint Jack' by The Primevals. But, believe it or not: the record has gone! I can't remember having sold it or having lent it to someone who never gave it back to me, but either way ... it's gone. So Jonathan, if you want to hear something else instead, just let me know.