Good day to you, friends!

yes, everyone's doing it, so why can't I, I wondered! Well, the answer is rather simple: I can't do a list of my favorite songs released in 2015, because I'm so far behind in this game that I wouldn't be able to present it before 2017 or thereabouts! I have listened to some new stuff, yes, but only a handful of songs really convinced me. As for the rest, I always tend to rely on your impressive lists, which shows what a lazy bastard I am! The thing is, year ends today and so far I've only briefly gone through Brian's list in its entirety and I've downloaded parts of Walter's list, but the rest of your lists will have to follow. But I haven't found the time to listen to any of these tunes closely so far, although I'm confident they all are wonderful.

So, to cut a long story short: what you will get today is a list of songs I downloaded for various reasons within 2015, although the bulk of them is dead old!!

When flickering through them last evening, I thought to myself: hold on, why not do another one of those boring mixes again whilst enjoying the rest of the bottle of Portuguese red, not too much of an effort, isn't it? 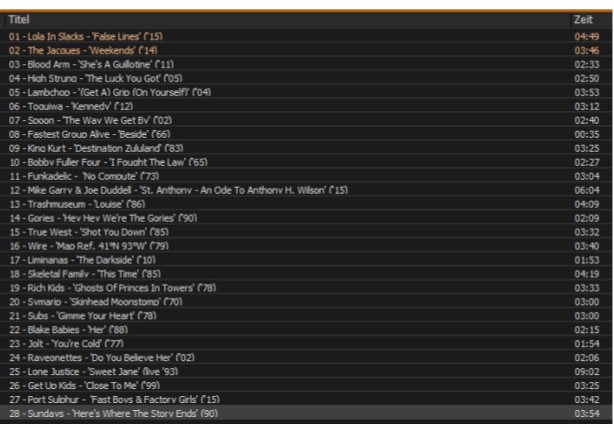 I do hope some of you enjoy this compilation. Links to the specific songs are hidden in the brackets above and the aforementioned mix is here.

So, have fun, enjoy whatever your plans may be for tonight and  - most importantly - please stay healthy, so that you can provide me with tons of good stuff and the usual rants within 2016!!

Take good care and have a wonderful New Year!

yes, you made it, congratulations! The final installment in this series and what a gem I have for you today: really, if you don't simply love this song, then something is seriously wrong with you!

Low come from Minnesota and Minnesotans know a thing or two about harsh winters – and perhaps that’s why this song, while containing the requisite amount of jingle bells, has a decidedly weary quality to it. At its heart it’s very sweet, being about one of those little shared moments that make you feel Christmassy, even though everything around you is telling you otherwise.

And that's exactly why you should listen to it closely .... and fall in love with it. Now!


Alright, I hope you enjoyed one or two of my choices. I certainly did. But more than that I hope you had a fantastic Christmas and I hope to find you all back in healthy form in 2016!

Day 11, and I can imagine that the vast majority of you will be fighting with a nice little hangover after yesterday's Christmas bash or will already be on their way to visit their aunts and uncles in the sunny Midlands or something along those similar lines!

If so, you'll miss another catchy little Christmas tune, for sure:

I do hope the title of this song is true for all of you and that Christmas - so far - is cool indeed!

See you tomorrow for the final day of Christmas, okay?

and a very merry Christmas to all of you! I'm not quite sure if you already are allowed to give Christmas greetings on the 24th where you are, but it's my blog and so I'll do it, right?

So the working year is over for me today, and a hell of a year it was, so thank God it's finally done! Looking forward to having a few days off until January 4th, I do hope it will turn out to be more or less relaxing.

And if Santa will bring you nothing else, here's to you one fine tune indeed, one of my all time favorites in fact. Turn the volume up now:

﻿﻿﻿ Now, Basement 5 just have to win the award for the most grievously underrated band of all time, I often think! Isn't this song absolutely bloody fantastic?! If only someone could provide me with the full lyrics, I'll be eternally grateful! Here you get the Peel Session Version of 'Last White Christmas', in many ways better than the original version. Vocals no longer by Don Letts, but by Dennis Morris.

Two more days of Christmas to come, tomorrow and the day after tomorrow, so you'll get two more great tunes, of course!

just one day to go, friends, and if you don't have passed your wishes on to Santa yet, it's nearly too late now!

I know what I want this year:

See you tomorrow, perhaps you'll find the time to pop in. Would be highly appreciated!

on day 8 I present to you The Raveonettes, a band I have mixed feelings about! Some of their output I can live without at times, but they do have the occasional good tune (well, perhaps that's a bit harsh, the majority of things they issued isn't all too bad) as well.

This one here is really good though, although the lyrics made me smile: "All the lights are coming on now / how i wish that it would snow ..." Jesus, I'm sitting here, typing this whilst wearing nothing but a T-Shirt in the middle of December! (*) No snow in sight whatsoever, in fact I'm contemplating to get the pool ready again!

See you tomorrow, have a nice time until then!

and welcome to day 7 of my little collection of Christmas songs I like very much!

After yesterday's belter I thought you'd perhaps need something more "fragile" and Christmas-related stuff. And exactly this is gonna come up today, but nonetheless it is a very fine tune indeed!

From a Peel Session, and if memory serves correctly, from a Peel Christmas Session held at Peel Acres in Stowmarket in 2002, a place I once had the honour to stay in for a few days with the great man back when I was much much younger!

Here's to you an old Christmas favorite, presented by Belle & Sebastian. Enjoy:

day six it is, which means half the fun is already over: what a shame this is, to be sure!

the again Christmas comes nearer and I bet you are all looking forward to it a great deal ... I most certainly am, although I cannot expect big presents this year, we had to buy anew car and Little Loser got a new room as he had grown out of his baby-like furniture, as he likes to call it.

Another real treat for you today, and again a combo which I virtually know nothing about, I'm ashamed to say. Apparently the guy hails from Washington D.C., the tune was a 7" back in 1978, and that's all I can tell you. The track though grows on you, so give it a good and loud listen:

See you all tomorrow, hopefully!

okay, for a change we have a tune today which is a bit older, nevertheless it's a real gem, another real Christmas favorite, at least for me:

John Wilson and John Wessler only cut this one 45 back in 1965 but it’s become one of the key works in that fascinating sub-genre, the soul of Vietnam. Whether it's the powerhouse vocals or the busy guitarist, there are so many things to admire here. A really heartfelt plea from the battlefield this – a superb record! Alas I can't find a picture of Johnny and/or Jon anywhere, so you'll get one of the original 7" instead:

Leaves you rather speechless upon its brilliance, ey? At least I'm lost for words now and that's why I say:


as the women who run the bar where I DJ'd in when I was much much younger often said to me: 'Dirk, you gotta play at least sometimes something familiar in order to jolly the guests along', here's something more familiar for you today, a song you can all sing along to. And that's what you really want to do when Christmas is near, isn't it?


The Dandy Warhols come from Portland, Oregon, and this, basically, is all I know about them. Should I delve deeper into their back catalogue? You tell me ....


so yes, here we go again with the next tune in this series of posts! I do hope you enjoy my efforts, it might be the only thing you get for Christmas, who possibly knows?!


DJ Riko is a nice chap, so nice in fact that he provides us with a brilliant Christmas mix each year since 2002 (!): all of them are fantastic and have become frequently played over the festive season in our household, much to the dismay of Mrs Loser. Have a look at Riko's website (http://www.djriko.com/mixmases.htm) and get the 2015 Merry Mixmas - mix (or any of the previous ones as well) whilst it's hot!


Today's choice for day 3 comes from the 2007 - mix and it features Marcie, whom I know nothing at all about. But if she looks at least halfway as good as she sings, I'm sure she is a breathtaking beauty!

yes, day 2 in our little series, and I bet most of you thought that I wouldn't get that far, right? Ah, no, you're wrong, and although I admire those of you endlessly who manage to post on daily basis, partly for years, I never could do that.

Here's number two for you:

I don't know all too much about The Killers, they come from Las Vegas and apparently they have issued ten of those Christmas - singles over the years. This is but one of those, the second one, from 2007 in fact. Not all of them are killers (ha ha! got it?), but this one is, for sure!

Watch out for more to come tomorrow!


in order to get this site running again in one form or another after quite a long hiatus, I thought I shamelessly copy something which other folks do every year, and most probably do much better than me: twelve Christmas anthems on twelve consecutive days.


'What a brilliant idea!', I hear you scream, 'so new and innovative!' Yes, yes, I know, bugger off, but to be honest I couldn't be arsed to think of something better, at least you'll get 12 belters, promised, perhaps there are some Christmas - related tunes amongst them which you don't hear all too often elsewhere, who probably knows?!


This 'twelve days of Christmas' - thingy is, by the way, at least as fas as I know, more or less completely unknown here it Germany, all we have is 'Stille Nacht' and 'Kling Glöckchen, Klingelingeling', so these posts might be something of an educational achievement, if nothing else!


So, without further ado, here comes the tune I chose for "day one", a real gem, I'm sure you'll agree:


What a fine band and what a fine song to start this little rundown with. I'm particularly fond of the line "And you moan at the snow / ‘Cos your car wouldn’t go", how often have I sung this to myself on a freezing cold winter morning since I first heard this tune back in 2000?


From their album 'Trouble Over Bridgwater', which you should buy immediately in case you don't already have it in your collection. Then again this is true for all of the band's albums!


Alright, enough for today, watch out for the next installment tomorrow: same place, same time!