this is the start of a whole series for which I try to post a song from a band which I think - as the title implements - was (or is) grievously underrated. That of course reflects just my personal opinion, at the end of the day you will have to judge yourself. But in any case I can only recommend that you should have a listen to the songs: I really honestly do think that those tracks should have deserved more attention than they got when they came out. In my eyes they're all total classics and the people who wrote them are heroes to me!

So let's start with Calvin Party. As far as I know they come from the Manchester area and if memory serves correctly, before they turned into Calvin Party, they were The Levellers Five (nothing to do with The Levellers). In both formations they recorded for Probe Plus Records from Liverpool and whilst trying to ascertain a little more information for you, I found out that Calvin Party are still existing and even have a brandnew album out. Check their myspace side, what I heard there was not bad at all. There will also be a UK promotional tour which starts next month, and if you decide to go and see them, you might be lucky to hear them performing this one, from 1995:

If you want to get hold of this particular track, just have a look at the Probe Plus homepage. But bear in mind that the album of the same name does NOT contain this track, you will find it on the LP/CD 'Lies, Lies And Government' (Probe 43) though.

Next up something from a band not totally unknown, at least not to people of a certain age, so I would think. But if you've never heard this before, you really missed a treat. The original version of the song was titled 'Into The Garden' and now you know I'm talking about Artery. Artery formed in Sheffield in 1979, 'Into The Garden' though is from 1982. I have the original version on tape, but a 'different' version of the song (although the difference is not that big) was issued as the B-Side of 'The Alabama Song' - 12" in 1983. The sound quality is way better, therefore you'll get: 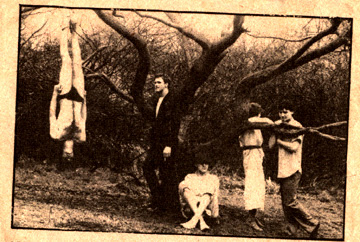 Next up a welsh band, something which normally always guarantees quality: The Glass Torpedoes. I don't know anything about them, apart from the fact that one of them later was with Nightmares On Wax. This here is from a 7" on Teen Beat Records from 1979, the A-Side being 'Someone Different', although - again - I think another song on it is much more enjoyable:

The third release on Hemiola Records from Leeds featured a combo from Arlington, Virginia: The Eggs. Despite of their stupid name the record itself was just marvellous. It must have struck a chord in Britain at least for a few people, because it reached # 10 in Peel's Festive 50 of that year. Doesn't make them worldwide superstars, but who gives a damn, right?

The Eggs - 'The Goverment Administrator' (mp3)

That's it for today, people, there's more to come, I'm sure. Before I go, I would - as usual - like to draw your attention to both the current and also to tomorrow's edition of the mighty Contrast Podcast: well worth listening, believe me!

Have fun ... and I would be more than happy to read any comments saying whether you liked the tracks as much as I do or not!

I have some time to kill time before my Grinderman - CD arrives (don't know yet whether it's the fault of the sender or of the post, but I will find out on Monday ... and someone will have to suffer then, that's for sure!), from which I will of course just love to post something here. So here are some tunes I haven't heard for quite a while, perhaps you will like them, who knows ....:

For the current edition of the Contrast Podcast we had to find something to accompany stories of ours about 'our brush with fame'. Only yesterday - after already having sent away my contribution - I thought to myself, I also could have sent in this track, a 7" on Fire records from 1989, and most wonderful as well, I would think:

This one has nothing to do with fame whatsoever, alas the opposite is true for this combo: in my eyes they're were greviously underrated. I say 'were', because I have no idea if they still exist or whether they have released anything else but this 7" in 2000 on V2 Music. Either way, even if they did nothing else, with this recording they have achieved much more in their lives than I will ever achieve in mine. Adorable, as you will be able to tell right now: 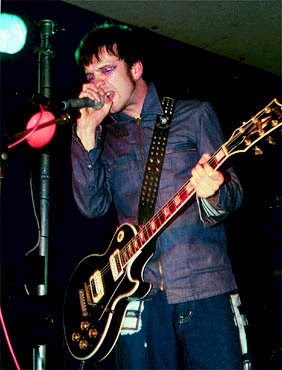 My wife just called me from the other room, where she's searching for some cool downloadable tunes, in fact Radiohead she's after. I can't cope with them, never could, but anyway: her search brought her to The Vinyl Villain - blog (purely coincidental, believe it or not!). Now, this showed me that the world of the internet isn't really that big, is it? J.C., mastermind behind the Vinyl Villain - and the only Scottish inhabitant with an understandable accent - contributed some Orange Juice the other day for the Contrast Podcast, so I thought why not play you this one:

Taken from one of those Peel Session 12" on Strange Fruit Records, recorded and (first) broadcasted in 1986.

[and for those of you too young to know: the starting line refers to the fact that Orange Juice's James Kirk wrote the song in 1982. (also on the vocals with Orange Juice, by the way, was Edwyn Collins: now this is a name you really should know, right?) And who acted as James Kirk in Star Trek? Correct: William Shatner, so there you are ...]

Also from Scotland are these people: Ballboy. There is nothing much to say about them, perhaps apart from the fact that they are the fucking best thing since sliced bread. If you don't owe at least one of their records, your life is somewhat incomplete. Don't worry too much about which one to buy, they're all superb. This of course doesn't make it easier for me to choose a specific track to post here, but I think I go for this one from their 2003 'The Sash My Father Wore & Other Stories' - CD on SL Records:

And although I don't care a great deal for Springsteen, here's another one of his songs (and, so is the one by Ballboy, another contender for my Top 10 of 'Covers Which Are Better Than The Originals'), this time by Electrelane, also done in 2003:

Thinking of it, this 'Covers Top 10' really is something I should do here in it's entirety one of these days. In it would be also this one, of course, originally done by The Strokes, recorded in 2003 and covered here by a band which means as much to me as Ballboy do:

I hope, dear folks, this week's selection was enjoyable to you and I hope I didn't bore you too much: perhaps you have found something you've not heard before. If this is the case, I'm more than happy.

Some Goodies to start the New Year ...

First of all, dear folks: a very happy 2008 to all of you! Stay healthy, that's the main thing, I would think.
As usual I would like to draw your attention to the last three episodes of the mighty Contrast Podcast: Tim managed to convince his listeners to make up a Festive Fifty of their favourite songs from last year. I know that a quite a lot of such lists are currently being blogged, but I promise you that this particular one is a real treat throughout. Not only the musical choices are excellent, the same is true for all of the intros.

As you might imagine I spent a lot of time listening to rather moody Christmas tunes in the last few weeks, nothing wrong with that I would say. But now is the time for a little more straight and uptempo stuff, so here are a few tunes I always liked quite a lot. They have nothing much in common apart from the fact that I think they're rather awesome and not frequently heard elsewhere. So there is a little chance that you might not know them and will like them as much as I do. If this should turn out to be the case, leave a comment: I would be more than pleased ...

1.: The Rezillos - 'Somebody's Gonna Get Their Head Kicked In Tonite' (mp3). From the classic 1978 album 'Can't Stand The Rezillos' on Sire Records. Try Amazon, for example ... at least for the CD version.

2.: The Damned - 'Jet Boy, Jet Girl' (mp3). From 'Another Great Records From The Damned', an early compilation on S.P.I. from Italy. Deleted, of course. The sleeve says it was recorded by Captain Sensible and The Softies and I think the recording was done in 1982. You will of course all know the original by Plastic Bertrand, but this version is comparably good ....

5.: The Beasts Of Bourbon - 'The Hate Inside' (mp3). From their LP 'Sour Mash' on Red Eye Records. The Beasts come from Australia, this one is from 1988. You wouldn't detect it from the song, but they are a very nice bunch of people indeed: a friend of mine used to manage them when they were in Europe in the early 90's and I did some gigs together with them then .... the record is deleted as well.

That's it for today, my beauties ... enjoy, have fun and sing along if you want to. Buy the records if you find them and leave a comment should you need more info from me in order to do so. Also leave a comment if this is not the case ...