I originally posted the below in October 2008. You wouldn't believe how sorry I am to say that the situation hasn't changed awfully much, some five years later. One Step Brighter, one of my favourite blogs, has been removed as well yesterday. The same is true, as you know by now, for The Vinyl Villain. JC already found a new platform over here: http://thenewvinylvillain.wordpress.com/ and I can only hope One Step Brighter will continue in one form or another as well.

Either way: I can only assume that below letter got delayed in the post somewhere. So I'll re-send it to you now, Feargal, 'cos that's the kind of polite and scrupulous person I am ... some links might be dead, but don't let that put you off, Feargal. Partly it's your fault anyway ...:

I was suprised to learn from my mate J.C. that you have become rather successful lately. Quite a long way from singing in a grievously underrated band to becoming a Chief Executive for British Music Rights, isn't it? Well, it must have been a long way, Feargal, because apparently you seem to have forgotten some things. Important things, my old friend. I came to this impression because of the statements you made in this article.

Feargal, have you ever thought about why it is that you now have the successful job you currently have? Have you ever thought about who it was that made you so important? No? Well, I'll tell you, Feargal: it was us. Yes, us, the people who spent their hard-earned money for your records. The people who followed you around and paid to see your gigs. Some of them still exist nowadays, believe it or not. Those people are called fans, Feargal. Sometimes I think this is an expression which isn't used very often in your nice little BMR - office these days, right? Fans. Hmmmh. Sounds strange these days, I admit. But, the thing is, Feargal, fans - in the true sense of the word - are not criminals. Nor have they ever been. They are just little people who like what someone else has done or is doing. And they want to share their joy and excitement with other people.

Come on Feargal: you're not that old, are you? Do you really have forgotten what you did back in the mid 70's when you were short of money and your mate had the latest single, by, let's say, The Faces? I bet he taped it for you, didn't he, so that you could listen to it at home over and over again: "Pool Hall Richard, You're Far Too Wicked, We Know ...". Boy, that was fun, wasn't it, Feargal? I bet you sang along with it in your room like nobody's business, didn't you?

Your mate taped it for you for free, Feargal, so I assume. Or did you pay him for it? No, I bet you didn't. Now, would you describe your mate - and yourself, mind you - as having been criminals back then? Did you even give a toss about the fact that you stole Rod Stewart's money? Be frank to me, Feargal: you didn't, no way. Rod is a multi-millionaire by now, even though you and your mate stole his money. Deliberately.

You see, today the tape decks have gone. Out of fashion. Replaced by computers, Feargal. But the attitude has remained. Still some fans want to share stuff they really appreciate with other people. People who might not have the chance to listen to it that easily. And please don't get me wrong, I'm not talking about the real pirates. Those are criminals, I admit. I'm talking about fans. Fans who post a little something and in doing so they encourage other fans to go and buy other stuff from the artist. As easy as that, Feargal. Fans have a blog which is read by some thirty other fans per day, if at all. Pirates steal music on a commercial basis. Don't mix this up, Feargal, please!

If you want to save artists' rights, kindly attack the pirates and their battleships. Don't bomb the fans' rubber boats, my friend. I understand this is the easier thing to do, but that doesn't mean it is the right thing to do. So please leave us fans alone, okay? Ed, Steve and Coxon are not your enemies, Feargal, they're just fans. Not more, not less.

Think about this if you have a minute, Feargal. That's all I would ask for, mate.

All the best, your old fan,

PS: and to show the young fans - who probably can't afford to pay some 50 quid for this single (or whatever it's worth on ebay these days) - that you made some fantastic records some years ago (and therefore can't be such a bad chap after all), here's your 1978 debut on Good Vibrations Records: 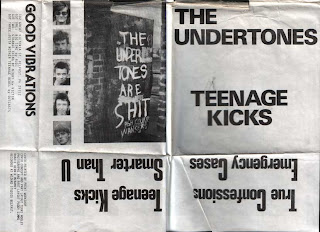 I'll await your kind response to this, Feargal. In one form or another ...

From the heart Dirk

Dirk, you should run the music industry mate. Feargal can eat my shorts. I've just finished playing football in them in really hot weather. Not very pleasant, but he can eat them all the same!

Letter of that year .. and this one too.
If passion was a sea monster, you'd be a daddy leviathan.

Love - and lashings of respect.

Unless I'm very much mistaken. One Step Brighter has indeed regenerated over here:

Seems quite a few good reliable Blogger sites go down over the past week or so...stay safe!